“Despite the pressure exerted by the very short timeline to degree required by the military, he never hinted of the stress he must have been under,” she said. “One of my fondest memories while working with him was the day he came in for a meeting about his project and under a bit of questioning admitted that his first child had been born the night before and he had been up all night! It was an honor to help guide him through his project. I’ve followed his career since with interest and quite a bit of awe.”

Two years after graduating, Schueman began writing in earnest about his own wartime experiences and his years-long relationship with Zaki who was still fighting to obtain a visa.

“The book is about making meaning, and while I was at Georgetown I had an opportunity to unpack my experiences. I found that writing was the most cathartic way to work through it.”

When they met in 2010, Schueman had had several interpreters quit when bullets fired, but Zaki did not. He spoke the local dialect as well as English and connected with him on a professional level, Schueman says. “He went from being a person who translated for me to a friend and then a brother fighting alongside us.”

From understanding cultural nuances and facilitating interactions with locals to reading both the human and geographical terrain, Zaki and Schueman worked together for seven months. Zaki continued to serve with the U.S. military for another two years, and the threats on his life continued. Schueman noted that “it was well documented that the Taliban would execute anyone they discovered who had worked with U.S. partners.”

Five years after Schueman began helping Zaki apply for the Special Immigration Visa program — an opportunity offered to allies who volunteered to support the war efforts alongside the U.S. and were subsequently being persecuted — his friend’s application still hadn’t been approved. In early 2021, when Schueman asked what would happen to him if U.S. forces left entirely, Zaki said his family would be killed.

Schueman got busy trying to find a way to get his friend out. He used his platform on Instagram, developed from his capstone project at Georgetown, to start a social media campaign in April 2021 to get Zaki and his family out of harm’s way. He met with staff for senators and congressmen and even appeared in a front-page story in the The New York Times highlighting his efforts. Still Zaki’s visa was stalled.

Schueman eventually coordinated a rescue operation for Zaki and his family when the U.S. withdrew from Afghanistan in August 2021. On the third try, after an hour and half of silence in his group chat with Zaki, Schueman learned his friend’s rescue was only accomplished by the sheer might and mettle of a military friend who put together a team of soldiers, jumped a wall to push the Taliban back and pulled Zaki and his family to safety.

Shortly afterward, Schueman decided to write a memoir about his experiences and invited Zaki to join him. The book alternates chapters between the two authors — a baton-like handoff Schueman and Zaki felt was important to allow readers to hear both sides of the story.

“I find what Zaki has to say about being 11 years old on September 11th in Afghanistan and how he talks about it in a pastoral and beautiful way – instead of being a war-torn country – was an important perspective to include,” he said.

In the process of writing this memoir, “Always Faithful,” Schueman said that lessons learned from the M.A. English program equipped him with the critical thinking skills to process, analyze and articulate his wartime experiences using best practices gleaned from several writing program professors to frame a sustained argument throughout the entire book. It was published by HarperCollins in August 2022. 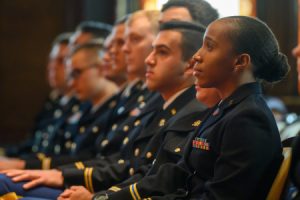 While Schueman’s memoir honors and reflects upon how his path converged with Zaki’s in Afghanistan and how they developed an unbreakable bond despite the dangers inflicted by the war on terror, he shared that it was also “about making meaning and writing to figure out my own experiences.” Deeply personal with a boots on the ground account, they both ask whether twenty years at war in Afghanistan was truly worth the price.

“We veterans are so fortunate to know the deeper worth of serving something selflessly and what a privilege it is to commit yourself to a higher calling. To make the sacrifice and stand amongst men and women who are all committed to one another — whether we did it for four years or forty — is an incredible privilege.”