A middle-aged man identified as Alaafin Washington is worried Nigerian singer might never get to visit the US even in future.

Alaafin Washington shared a video and revealed what actually stopped the United States from giving the Zazoo crooner a visa.

In the video, he noted that Portable insulted the immigration officer and consulate on his first day and showed a receipt of the money the singer sent.

He also noted that he is old enough to advise Portable about the character, saying if he continues like that, show promoters will run from him.

Alaafin also stated that the singer denied people who followed him that he doesn’t know them and insisted that no matter who is influencing his going to the US in the near future, they won’t give him visa.

Watch his video below:

Social media users have reacted differently to the man’s revelation about how Portable was denied a US visa.

Legit.ng picked some of the comments, read below:

“Why you guys park all Lagos follow him without proper arrangements, he needs to know each person n give them jobs in the band, he needs to mention their names n what they are doing in the band.” 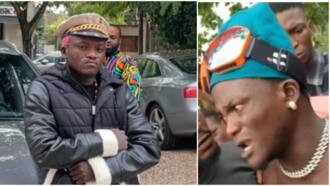 “Immigration officer they USA embassy nii? He’s lying. I believe he try to use portable and bring in other people without his consent.”

“That’s how Portable choose to live I guess you guys should leave him, stop advising him he isn’t a kid.”

“How you know say he abuse consular, you follow am enter?”

Portable cries out over N20b lawsuit from promoter

Legit.ng previously reported that Nigerian artist Portable seemed to have been caught up in a shady deal that has prevented him from travelling to the US.

Portable said an international promoter promised to get him a US visa, but after failing to get it after five times, he gave up.

He revealed another friend tried to help him out, but the promoter he had signed the previous deal with insisted he must pay N20 billion in damages before they could let go.