TOMMY FURY faces his ninth professional fight TONIGHT as he takes on Rolly Lambert in Dubai.

The light-heavyweight prospect hasn’t been in the ring since he picked up a win on his brother Tyson Fury’s undercard back in April.

But now he’s back on the undercard of Floyd Mayweather vs Deji in Dubai.

Fury was scheduled to fight Jake Paul earlier this year but issues with his US visa put that clash on the back burner.

Fury was originally supposed to face Paul Bamba tonight but issues over the contracted weight has scuppered the fight.

Lambert, the WBC and WBA Asia champion at cruiserweight, has stepped in to fill the spot.

The Love Island star will see his fight with Bamba as the perfect bout to get him ready for a bigger one next year.

Fans can watch the clash between the pair live on DAZN PPV in the UK. 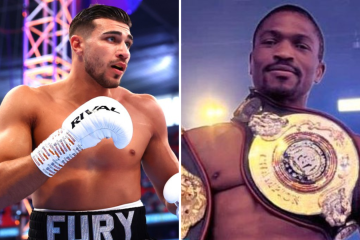 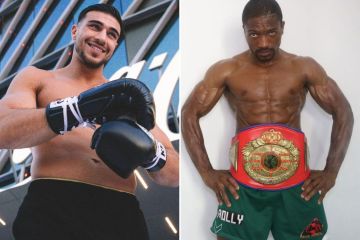 What time are the Fury vs Lambert ring-walks?

Fury’s clash with Lambert is the co-main event of the event, which is headlined by Mayweather and Deji.

The main event is due to get underway from just after 10pm UK time on Sunday, November 13.

So you can expect Fury vs Lambert to get going from around 9.15pm GMT.

What channel is Fury vs Lambert on?

Fury vs Lambert isn’t on traditional TV as it’s being shown on streaming site DAZN.

You can live stream the action from the DAZN app, which is available to download onto your mobile or tablet device.