Famous Nollywood filmmaker Kunle Afolayan recently cried out to complain that his popular movie Anikulapo was rejected by the Oscars despite it satisfying all of the criteria provided for it.

Kunle Afolayan slammed the Nigerian Oscar committee in a tweet he shared on his Twitter handle after his latest movie Anikulapo was rejected.

During a brief chat with Legit.ng’s Nosa Oke-Hortons, Afolayan explained his side of the issue and what led to the infamous tweet.

“I reached out to them when I wanted to submit Anikulapo and asked them what the parameters used to judge a movie that gets selected for nomination are. They sent it to us and said to read this, and we ensured that we met all the criteria, including putting the movie in the cinemas at least seven days before it is released on Netflix.”

Kunle Afolayan explained that he and his team ensured they met all the criteria given to them, and even Netflix was involved and agreed that the movie could go to the cinemas before it was released on the streaming platform.

“As a matter of fact, Anikulapo is supposed to be just exclusive to Netflix. We were not supposed to do cinema, but because Netflix also would like for us to submit, they gave us a bit of window for us to do the seven days in cinemas. So we met all the criteria.” 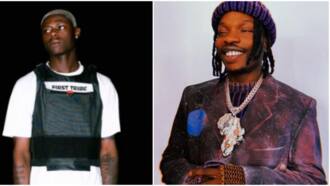 “He instructed his boys to beat me and my friends”: Mohbad shares details of attack, says Naira Marley lied

Afolayan revealed that the committee is composed of a 15-member team when asked how the committee decides which movies get submitted. And when they were to decide on Anikulapo, it went to a vote, and 8 members of the committee voted against it, and that was how the movie was rejected.

Meanwhile, Legit.ng recalls reporting that veteran Nollywood filmmaker and actor Kunle Afolayan recently spoke about his latest movie Anikulapo, which is set to be the third of his Netflix original in the last two years.

Afolayan in a chat with Legit.ng’s Oke-Hortons Nosa said the movie is a surreal portrayal of the Yoruba culture and beliefs based on the Ifa mythology.

When Kunle was asked to give an estimated value of what it cost to produce Anikulapo, he said that bringing all of his ideas for the film to life cost him a lot of money.